Ice Cream for the Obamas 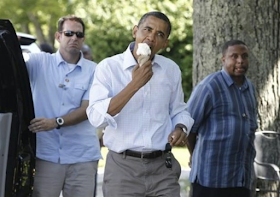 During a fun-filled summer vacation in August of 2009, the Obama family toured Yellowstone National Park. After watching an eruption of the Old Faithful geyser, the Obamas stopped for ice cream at a nearby general store. Before placing their orders, President Obama reportedly asked about the ingredients of such flavors as Moose Tracks, Stuck in a Rut and Buffalo Chip.

When a server began “carving an enormous scoop" of Stuck in a Rut for Sasha, the president reportedly urged restraint. “You don't have to make it that big," he said. “She's not going to be able to eat all that.” After finishing their treats, President Obama departed for a town hall meeting on health care in Colorado while Sasha and Malia headed to a nearby orchard with their mother to pick peaches.

Although news reports didn't mention what flavor the president ordered that day, he was photographed in Maine enjoying a single scoop of coconut ice cream. So in honor of the president's birthday this week, here is a recipe for Quick Coconut Ice Cream adapted from Delicious Days by David Lebovitz: 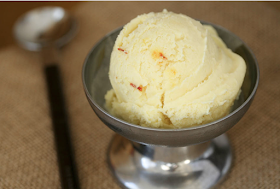 In a medium-sized saucepan, bring all the ingredients to a boil. Reduce the heat and simmer gently for ten minutes, stirring occasionally. Remove from heat, and chill the mixture thoroughly. Once chilled, freeze in your ice cream maker according to the manufacturer's directions. Once churned, be sure to scrape any saffron threads clinging to the dasher back in to the ice cream.

FOOD FACT: Historians say that the origins of ice cream can be traced as far back as ancient China, where fruit-flavored ices were created, possibly as early as 3000 BCE. The ice creams we are familiar with today, however, are said to have been invented in Italy in the early seventeenth century. As time and technology progressed, ice cream flavors, complicated confections, and novelty concoctions, like ice cream sandwiches, sundaes, popsicles, and banana splits, became popular.