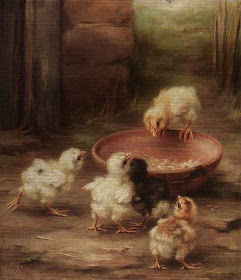 Although they may have become accustomed to elegant State Dinners, many American presidents enjoyed a wide variety of homey dishes prepared with chicken while living in the White House. James Madison was reportedly fond of Chicken and Okra Soup, James Monroe retained a childhood taste for Chicken Pudding with Fried Rice, and it has been said that Woodrow Wilson frequently requested that Chicken Salad be put on the White House luncheon menu during his two terms of office.

But that's not all. John F. Kennedy and his wife Jackie were fond of Poulet a l'Estragon (Chicken Tarragon); Richard Nixon reportedly enjoyed his daughter Tricia's homemade Chicken Divan; Bill Clinton was, and perhaps still is, partial to chicken enchildas made with a cheese similar in texture and taste to Velveeta; and one of Franklin Delano Roosevelt's favorite dishes was reportedly Country Captain Chicken, a curried-chicken dish with mysterious origins.

In her nineteenth-century cookbook, Eliza Leslie claimed that the dish got its name from a British officer who brought the recipe back from his station in India. Others maintain that the dish originated in Savannah, Georgia, which was a major shipping port for the spice trade. In Rare Bits: Unusual Origins of Popular Recipes, Paterica Bunning Steven puts forth another other theory about the origins of this slightly spicy chicken dish:

According to an oft-repeated story, a sea-captain sailed into Charleston harbor with a shipload of spices from India. Entertained by the hostesses of a city noted for its graciousness, he repaid their kindness by teaching their capable cooks to make a delicious dish of chicken and curry. Alas for legend! A virtually identical dish is known in England, where it goes by the very same name. The captain, if there ever was one, must have been a British officer stationed in the back country of India. An English writer has noted that "country captain" is also an Anglo-Indian term from the captian of a...ship...from a foreign country. Just how or if that fits into the puzzle would be difficult to say. Another suggestion is that Country Captain may be only a corruption of "country capon."

Although no one knows exactly who created and named this dish, we do know that it has been popular throughout the south for centuries. If you'd like to try it someday, here is a simple and delicious "30-minute Recipe" from the Food Network's ever-peppy Rachel Ray:

Bring water to a boil in a medium saucepan. Add butter and rice and return water to a boil. Reduce heat to low and cover the pot. Cook rice 20 minutes or until tender. Turn off heat and fluff rice with a fork.

Combine flour and paprika in a shallow dish. Season chicken with salt and pepper. Cut each chicken breast and thigh in 1/2 on an angle. Coat chicken pieces in paprika seasoned flour. Wash your hands and chicken work surfaces thoroughly.

Heat a large skillet over medium high heat. Add oil to the pan. Brown chicken pieces, 3 minutes on each side, and remove from the skillet. Add butter to the pan, then stir in peppers, onions and garlic. Season the veggies with salt and pepper and saute them 5 to 7 minutes to soften.

Add curry, stock, tomatoes and raisins. Slide chicken back into the skillet and simmer over moderate heat for 5 minutes to combine flavors and finish cooking the chicken through. Place skillet on a trivet and serve the chicken from the pan. Garnish the Country Captain's chicken with sliced almonds. Transfer rice to a serving dish and garnish with chopped scallions.

FOOD FACT: So now that we know which presidents liked to eat dishes prepared with chicken, it seems only fair that we consider what chickens like and need to eat for their well-being. According to experts, chickens need grains; greens (like grass, green vegetables and weeds); protein (from bugs, worms, milk and meat); calcium (from Oyster shells); as well as Vitamins A and D, and salt. And because a chicken's weight is made up of more than fifty percent water, they need a constant supply of fresh water to "drink."